To quit smoking is one of the best things you can do to improve your health, and it is never too late to quit. No matter how many years you have been smoking, how much you smoke, or how many attempts you have made to quit, quitting is always possible. Remember who you are doing it for; yourself. This page exists to inform you of the harmful impact that smoking has on your health and the health of your loved ones. It is designed to help you in your quest to quit smoking.

More than 10,000 people die prematurely in Quebec yearly because of their smoking habit. This is 28 people daily.

Although the proportion of smokers has decreased considerably over the past 15 years, 1.5 million Quebecers still smoke, which amounts to over 20% of the population. People aged 20 to 24 remain the heaviest users of cigarettes.

How Smoking Harms Your Health

Tobacco smoke contains more than 4,000 chemicals, 50 of which are known carcinogens.

The most dangerous are: 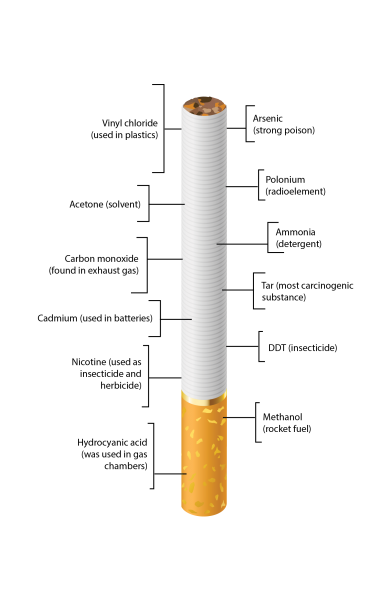 Smoking affects the longevity and the quality of life of smokers. On average, smokers have a shorter life expectancy than non-smokers (10 years shorter). Smoking deteriorates the well-being of smokers in several ways:

Cigarettes also increase the risk of respiratory infections by altering, among other things, the function of the vibratory cilia that line your bronchi. These tiny hairs work like brooms, sweeping dust, mucus and germs out of the lungs.

The Health Benefits of Quitting Smoking

Did you know that the benefits of quitting smoking can be felt within the first 20 minutes of quitting? 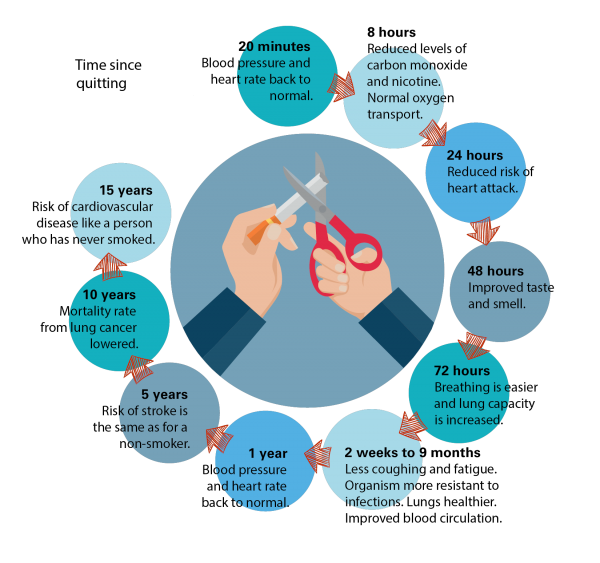 Two thirds of cigarette smoke is released into the air and onto surfaces. Non-smokers are therefore indirectly impacted by it. Opening windows, smoking in another room with the door closed or under the kitchen hood does not protect the occupants of the house from the harmful effects of smoke, because smoke easily flows from one room to another and enters through ventilation ducts, electrical outlets, door sills, etc. Air purifiers and ventilation systems also fail to protect against the harmful effects of smoke. They are designed to limit the build-up of carbon monoxide, filter out solid particles and reduce the smell of smoke (but not eliminate).

The passive smoker is likely to breathe two types of smoke:

The best way to protect your family from exposure to second-hand and third-hand smoke is to avoid smoking inside an enclosed space such as your home or a car.

Anyone who breathes these types of smoke inevitably becomes a passive smoker.

What the Law States

Law 44 aims to strengthen tobacco control and protect children and the public from exposure to second-hand smoke as well as to prevent initiation to tobacco use. Failure to comply with this law can result in fines ranging from $250–750 for a first offence and $500-1500 for a subsequent offence.

Places Where Smoking and Vaping are Prohibited:

Getting Ready to Quit Smoking

You have taken the first step: you decided to quit smoking. It is quite a challenge, but there are many tools available to support your efforts. However, there is no magical solution to quit smoking. You need to find the method that works best for you. Remember that urges to smoke usually last only a few minutes; take it one day at a time and you will succeed. First, you must have the will to quit and you must do it for yourself.

Why Is It So Hard to Quit Smoking?

Tobacco leads to addiction on many levels; physical, psychological and social. This is why people find it hard to quit smoking. In order to increase the chances of success, one must first become aware of these three types of addiction and then find solutions to overcome them.

Nicotine is the active ingredient in tobacco that triggers and maintains physical addiction. Nicotine stimulates the brain by releasing endorphins, substances that reproduce a feeling of well-being. Endorphins are naturally produced by the brain during physical activity and are responsible for the state of relaxation that follows. The brain of a smoker becomes dependent on nicotine to produce endorphins, which pushes the smoker to smoke more in order to regain that feeling of well-being.

Tobacco programs the brain to associate smoking with feeling good. Smokers associate the act of smoking with pleasant moments such as having a coffee at the end of a meal, attending a social activity, enjoying a phone call with a friend or taking a relaxing break. Although smoking may seem to reduce anxiety, boredom and stress, it actually only reduces the withdrawal symptoms felt by your body when it is craving nicotine. As a result, nicotine addiction combined with the pleasure of smoking makes smoking a habit that is difficult to break.

The action of smoking plays an important role in our society. Teenagers often start smoking to fit in with a group of friends. When you first meet someone, “Do you have a lighter?” is an easy question to ask to break the ice. In addition, social groups form when the same employees regularly go out to smoke during breaks.

Keep an Eye Out for Withdrawal Symptoms…

These are the most common withdrawal symptoms:

In order to reach your goal to quit smoking, it is important to be well prepared. This will increase your chances of success. Here are some exercises that will help you in this process.

Medications That Can Help You to Quit Smoking

Your body and brain need to relearn how to function without nicotine. During this phase of adjustment, you may experience withdrawal symptoms. Medication can help to reduce these symptoms and can double or even triple your chances of success.

Two types of treatment are available to help you quit smoking: nicotine replacement therapy and non-nicotine pharmacotherapy. Nicotine replacement medications reduce cravings by releasing a controlled dose of nicotine into the body, which helps control withdrawal symptoms and also gradually reduces the amount of nicotine you need.

Nicotine-free medications are also available to help you quit smoking. They are available in the form of tablets and require a doctor’s prescription.

Products to help you quit smoking are available in many forms. Talk to a health care professional to find out which of these medications is right for you and to make sure there are no contraindications regarding your health.

Every medication, no matter how effective, has side effects. However, this is not a reason to stop taking the medication. If you have any concerns, talk to your health care provider.

To increase your chances of success, you can use a combination of medications. Make sure to read the guidelines carefully and strictly follow them. 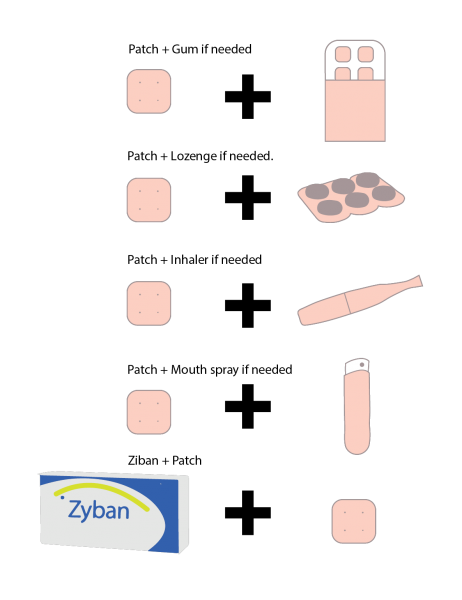 Some nicotine replacement medications can also be prescribed by a respiratory therapist, pharmacist or trained nurse. Some of these medications are also covered for a period of 12 consecutive weeks per year, beginning on the date of the initial purchase. 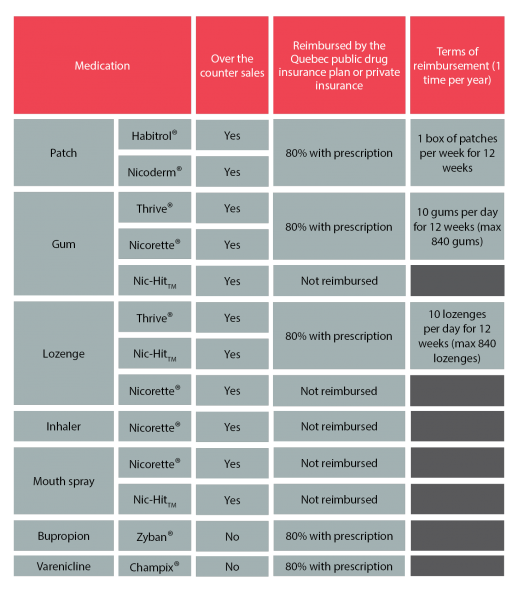 Smokers often fear relapse and see it as a failure. Remember that relapsing is often part of the long process of quitting smoking. We should not speak of failure, but rather of learning and experience gained.

Family, friends and co-workers can offer moral support and should try not to impose unnecessary stress.

Reflect on and work through situations where you doubt your ability to resist smoking.

Quit Smoking with an Electronic Cigarette

Since electronic cigarettes pose less of a health risk than regular cigarettes, they can be used as a last resort, that is, when nicotine replacement therapies, nicotine-free smoking cessation medications and smoking cessation programs have not worked or are not applicable to you.

There are several different methods that can help you to quit smoking. Hypnosis, laser therapy, acupuncture and homeopathic products all fall into this category. However, studies conducted on these alternative methods are inconclusive, so they are not considered effective for quitting smoking. They can sometimes strengthen your conviction to quit but beware of people who call these methods “miraculous”.

The Quebec Lung Association is a direct service provider to the public. For more information, check out our website section named Patient resources.